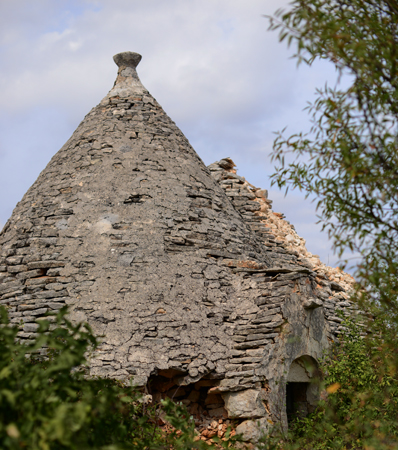 The country roads in this lower part of Martina (The locals do not refer to their town as Martina Franca and looking at the Italian maps, the Franca part of the name is generally smaller and less emphasized.) are full of old and renovated trulli.

We took a long walk down Via Cupa going away from Martina and found both renovated trulli and old, falling-down ones. The renovated trulli use a rounded stone-brick to cover the outside of cone.

The original trulli use a flat stone to cover the cone. The flat stone allowed for stacking without mortar. In the image on the left you can see the flat stones. And between the outside stones and the inside plaster, the old farmers filled the space with the small stones found in their fields. The small stones are exposed in the back cone where the exterior stones are missing.

I’m gonna start writing about the legacy that the peasants left in the Mezzogiorno. In Puglia, the trulli that now attract visitors from all over, were peasants houses. The stones that they removed from the field they used to build the walls that parameter the roads, the properties and the cones that topped their farm-houses. (Both the walls and the trulli use a dry stone construction.)

The cucina povera that is now the rage in all the healthy eating books, was developed out of necessity. When you had no money and the padrone owned the land you farmed, then developing inexpensive, but healthy nutritional option was a necessity. (Today, the first-world nations have freed up their population from the demands of foods production so that they can concentrate on the development of new products and technologies that will make life easier.)