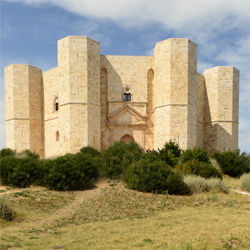 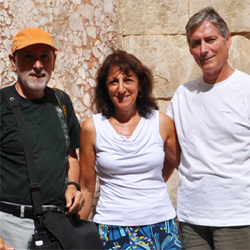 Castel del Monte, Frederick-the-Second’s 13th-century citadel is 14 kilometers south of Andria. It stands on a promontory, on land inherited from his mother Constance of Sicily. It has neither a moat nor a drawbridge; it was probably built as a hunting lodge. It is considered one of the most fascinating castle built by Frederick II. The castle and surroundings are a UNESCO World Heritage Site. The castle appears on the Italian one-cent euro coin.

The castle is an octagonal prism with an octagonal tower at each corner. The floors have eight rooms and an eight-sided courtyard occupies the castle’s center. In the image on the right, the three of us are in the courtyard.