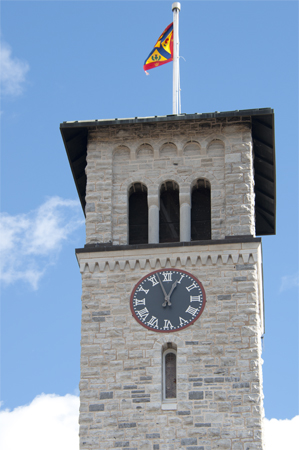 School legend has it that a group of engineering students, probably drunk engineering students, decided to leave their mark by changing the face of the clock on Grant Hall. They redesigned the Roman numerals and changed the IV to IIII. (The legend is questionable given that it wasn’t unusual to represent the number 4 using the four IIII.)

The Victorian Romanesque style is everywhere on campus as well as in the large, rich houses in the old town.

The university is relatively small by modern standards – 25,000 students. Its campus is well defined and not at all cramped. In the last few years, new construction has been for dorms and other student amenities. Classrooms and research centers are housed in the old, retrofitted buildings. (The new library, keeps many of the Romanesque lines; they’re just in concrete rather than stone.)

When I was living in Canada, Queen’s was not a school anyone I knew, went to. All the kids from northern Ontario went south to the University of Toronto, the University of Windsor or the schools in the London, Kitchener, Guelph area. We gravitated to the urban centers and to the Math/Science schools. Also we were not drawn to anything that looked or smacked of Englishness. And Kingston has always had an air of Englishness about it. Also, the Kingston of the 1960’s was famous for it federal prisons more than it tony university.

The term English in the Canada of the 1960’s represented colonial privileged and colonial entitlement. It was the pejorative that we called the non-Italians. The next generation changed the slur to mangia-cake. A reference to the fact that these non-Italians seem to eat a lot of soft desserts; foods devoid of flavor, but loaded with sugar. The sub-text of the insult was that the diet made these non-Italians stupid. We were the generation that wanted nothing to do with Canada’s British legacy. Because, we were constantly reminded that we were not English, that we were less than. And proof of that diminished status was our olive skin.

In modern Canada, Italian immigrants and their Canadian born children have become mainstream and my niece, nephew and cousins look at Queen’s as a feather in their academic career cap. How things change. Seane was whining about her bland surname. “Why can’t my last name be Zinga? Seane Zinga would be such a cool name.” How things change. I bet her mother would be shocked to hear that in one generation, an Italian surname was more desirable than the English one she left her children.

I just liked seeing a Canadian city without steel mills and mines; a Canadian city that hadn’t bulldozed its old housing stock in favor of the ubiquitous suburban track-house. Mind you, there is plenty of suburban housing in norther Kingston. You know, the ugly garage-houses with their cookie-cutter sameness, their shoddy construction and million dollar price-tags.