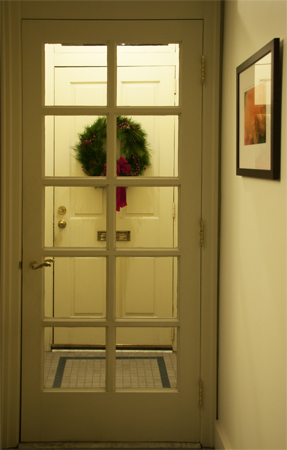 It’s been a while since I decorated for Christmas and I’m going to use this as an opportunity to weed out ornaments and other chach. I have three huge boxes filled with nut-crackers that haven’t seen the light of days in years. I wonder how they’ve held up.

The image on the left is of the vestibule. I always put the wreath on the inside of the door that way I get to see it. (Putting it on the outside means I only see it when I’m outside. Nah!) I have a second wreath on the kitchen door. It took a while to get the image; I had to take a bunch before I figured out what I wanted and once I decided I wanted the whole door and the whole vestibule, the blue frame in the floor-tile and no transom, then I had to move some things to minimize the number of lines. (I like having the hall-wall and the picture in the upper right, the frame outside the doors matches all the other rectangles in the two doors.)

It’s amazing to research wreaths and to find that they’ve been part of human symbology since the Ancients. Wreaths has been used at funerals since at least the time of Ancient Greece. Evergreen wreaths were laid at the burial place of early Christian virgin martyrs, the evergreen representing the victory of the eternal spirit over death. My first memory of a wreath was in 8th grade at St. Veronica’s. Each Monday in December, Sister Drusilla would march us out to the hall; we would line up on either side of the corridor and we would participate in the Advent ritual of lighting one of the purple candles on the wreath she had placed on a small table. This was followed by the song O Come, O Come Emmanuel.