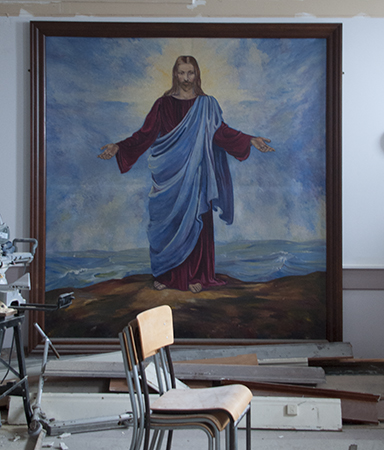 I spent the morning with Domenic Belsito, known to everyone locally at Mo. (I cannot bring my self to calling him that, because it reminds me of one of the three stooges, but the nickname really comes from the Italian diminutive for Domenico – Mimmo.)

His youngest son bought an old church in the west-end of town and is slowly renovating it into six apartments. The image on the left is on the basement wall. The painting is easily 7-feet X 10-feet. Kevin has had it appraised and it has a decent value, but the size makes it hard for anyone to buy it.

The renovation is creating some great spaces in the old church. Kevin and his family will live in one of the apartments during the winter months. They now have two small boys and need to be in town during the winter months. Their home on Trout Lake is beautiful, but the location makes it a difficult place to access during the winter months. We drove to their house on the Lake and the road was covered in ice and melting snow. And there are some difficult hills and curves on this private road. (The City Road to the lake is well maintained, but the road that leads to the cottages around the lake is the responsibility of the residents and that maintenance is inconsistent. Because not all cottage owners are year-round residents it’s been difficult to assess everyone equally and pay for the upkeep and snow removal.) The area is a micro-climate and even though the city was experiencing a very mild no-snow December, up at Trout Lake, the land was covered in snow.

The images I shot from the decks overlooking the lake were not crisp. The weather was so warm that the lake and its environs were shrouded in mist.