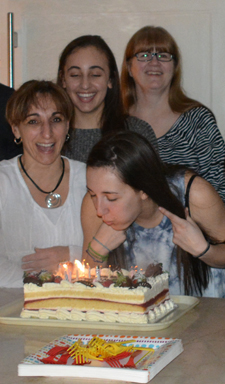 I drove up yesterday and the New York Thruway was hazardous. There were very high winds coming from the south and where there were no trees to on my right, the winds dumped all the snow from the open fields/the vineyards onto the highway creating white-outs and a slippery road-bed. There were several accidents; at one point traffic was down to one lane, because paramedics and police were untangling two cars that had somehow wrapped around each other. Also, there were many cars in the median. The winds were so strong that I was gripping the steering wheels trying to stabilize the car in order to minimize the sway from side-to-side. But once I was beyond the vineyards, the winds were also behind me. (It was strange to have the south lanes be so hazardous while the north lanes going west were free of drifts and raging winds.)

Because there was a full-house at Dave’s, I booked a room at the Holiday Inn. When I got there, the lobby was swarming with young kids all girls. They were chasing each other through the lobby playing tag and the screams were bouncing off the metal ceiling amplifying the volume. The parents were all Millennials and they were totally ignoring their children’s bad behavior. (They were in line waiting to check-in and until the kids started to come up to them, I thought that they like me, had nothing to do with the screamers. But no, they were the parents and totally oblivious to the disruption. OMG!! There they were with the iPhones, and their Coach bags, and their skinny jeans, and helmet hair, and their put-upon attitudes waiting on the overwhelmed clerks who didn’t seem to know who they were dealing with. We were in WASP Oakville and they were the better people. So what that the nannies weren’t there to take care of the out-of-control kids that shouldn’t reflect badly on the aging thirty-somethings in line.) I asked the receptionists what was going on and she told me it was a girls hockey tournament. What? Yap, seven and eight year-old girls playing hockey.