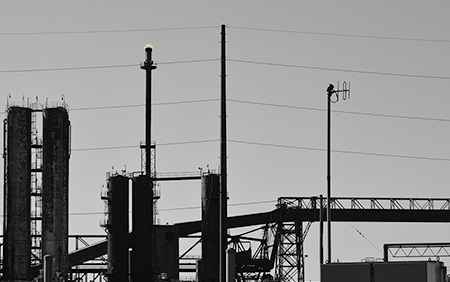 Back in the late Fifties and Sixties, the steel-mill the Plant was a source of pride for those of us living in this Northern Ontario town. A job in the mill guaranteed a great income; a job in the mill meant you and your family had access to the Algoma Steel Health Clinic – free doctors, free health care, free prescriptions. Calabrian immigrants flocked to Sault Ste Marie to work in the steel-mill, the Abitibi Paper-mill, the Algoma Central Railroad, the Weyerhaeuser Lumber-mill.

Going from high-school to the mill was an acceptable career path. For those of us heading to Southern Ontario for university, the mill was a great place to work during the summers. Frank worked at the Plant for over 4 summers, plus a 7-month stint from January to August of 1974. He claims, that the coke ovens and the blast furnaces have left an indelible mark on my mind. We could make enough money between May and August to cover the next year’s tuition, room-and-board, books and spending money.

I worked at the Plant the summer of 1970. My first assignment was on a steel-coil conveyor-belt. The red-hot coils came down the belt and a full-time worker and I put a band around the coil. You banded 10 coils and took a rest. I liked this assignment; it had a specific task and you did that task for 8 hours. The second assignment was in the Cold Mill. When we got there, for our 11 to 7 shift, the foreman told us to go find a place a sleep and to come back in time to punch out. I hated working in the Cold Mill. There was no way I could fall asleep on some bench in the middle of a warehouse. The third assignment that summer was at the blast-furnace. I worked with my uncle and my neighbor from across the street. The university guys moved the scarred bricks, lining the sides of the furnace, out and then handed new refractory-bricks to the brickworkers as they relined the sides. The old guys loved to mock us snots, after all we were never gonna get to feel the 3500-degree heat of hell on our faces. 1

In the Eighties and Nineties, a new reality hit – cancer was ravaging the mill-workers, young people were being laid-off in droves, the summer jobs dried up and the town’s economy went into a tail-spin. Within 10 years, the city lost 25% of its population.

But back in the late Fifties and Sixties, the steel-mill was our pride-and-joy.

1  At the end of August of 1970, I left Sault Ste Marie and never lived in Canada again.