Each time I visit, I’ve had a chance to go see the renovations Kevin and his dad have done on the old Lutheran church on Wellington. They are close to finishing and to putting the rental units on the market. Kevin said that the local media did a great piece on the renovation and that they had many inquiries. Old Steelton Church Born Again. His hope is that he will have all 5 units rented within the month. 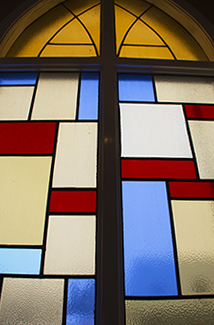 All the windows had a second plastic window in front of them; this was to both protect the old glass and to keep the winter out. The tall stained-glass at the entrance was hidden behind an opaque plastic sheath. Kevin said that once they removed the yellowed plastic the colors and the incoming light were amazing. For the side and basement windows, Kevin used a craftsman style replacement glass unit; and a great tradesman, who is working with them, was able to fashion the interior window framing so to maintain the arch in the windows at the front of the church.

Watching Kevin’s renovations and earlier in the week talking to Albert Tucci at the re-purposed St. Mary’s High School there is a real sense that the town is investing in the old Gore Street/Wellington Street area. Kevin’s renovation is at the west-end of the neighborhood and the re-purposed St. Mary’s is at the east-end of the neighborhood. Because the two commercial street – Gore and Wellington – are surrounded by solid, brick housing that can be renovated, this town supported revitalization comes with a residential component. The houses in the area date back to the 1940s.

So much of the newer housing in town is what I call throw-away suburban-track. These are houses that the extreme weather ages in 5 years; these are houses with a short life expectancy. They are built as temporaries, encouraging their occupants to move to a new house as soon as possible. But the houses around the Gore Street/Wellington Street corridor have solid bones. The old Lutheran church has basement walls 5-feet thick – solid, poured cement. And it’s good to see the next generation reclaiming, renovating and re-purposing the old structures that built the steel town that is Sault Ste Marie.