Woke up to a cliché winter-wonderland. Last night there had been a soft, light snowfall and everything was covered in fluffy, super-white snow. And with winter-wonderlands come decent temperatures or at least mercury readings that make walking outside OK. 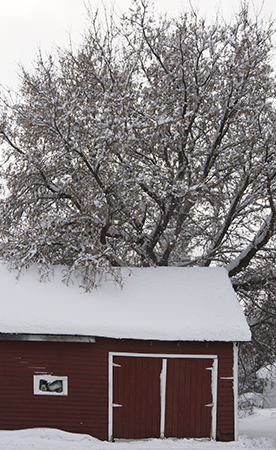 Rose, Derrick and I went out for coffee to a chorus from Mr. Ciccio Zinga – Oh my god, going out to buy coffee, when you can make a perfectly good cup at home. This was followed by asking Rose where Derrick was and when she told him that he was waiting in the car on the street, Mr. Ciccio went off on his latest rant – Can you believe that it’s 9:00 and my driveway is still unplowed? (This is a man who for years had his driveway cleaned and swept free of snow by 7:00 am.) My driveway … my driveway unplowed. Son-of-a-bitch! I gotta call that son-of-a-bitch, as soon as your aunt gets up, I call that son-of-a-bitch and cuss him out. It was great fun repeating the conversation to Derrick. This led to Rose describing her dad’s obsession with a clear-of-snow driveway.

My dad uses a Red Cross service that helps needy families. (The Red Cross co-ordinates a snow-removal service that hires people, at a certain income level, to clear home-owners driveways.)

After coffee, I went to visit my aunt-and-uncle and then opted to walk back to my parents’. The sidewalk-plow had just gone down the street where my aunt-and-uncle live, so I followed it walking the the tunnel that it had cleared between the snowbanks and what used to be the front-lawns. Winter really is the main experience this far north. And on days like today, it’s the landscape is exceptional. Snow decorates the aging housing; it distracts from the fading, pealing paint; it blankets sagging roofs; it covers weed infested lawns and cracked sidewalks.