nothing is in primary colors 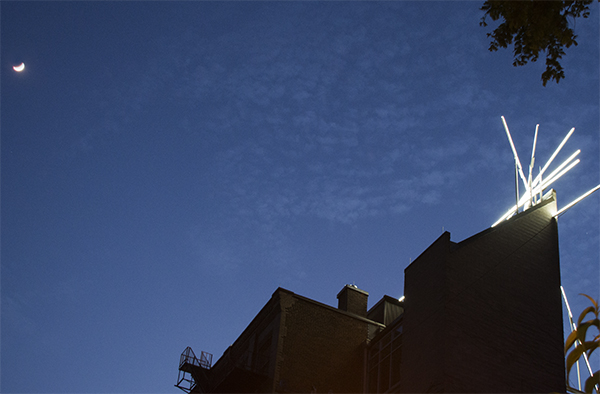 Acupuncture, an imaginative light sculpture by German artist Hans Peter Kuhn, will appear to “pierce” the roof and south-facing side of the building. The installation will include components of what Kuhn calls “light sticks.” Attached to metal scaffolding, the “sticks” will appear to cut through the top floor of the building, coming out of the roof, and then cutting back through the staircase tower. The installation’s size and configuration will make the piece visible from all angles, throughout the neighborhood and the city.

For age is opportunity no less
Than youth itself, though in another dress,
And as the evening twilight fades away
The sky is filled with stars, invisible by day.
Henry Wadsworth Longfellow

Twilight is about getting older and relationships – not about a murder mystery.
It’s about love when you reach a certain age; nothing is in primary colors.
Robert Benton

If in the twilight of memory we should meet once more,
we shall speak again together and
you shall sing to me a deeper song.
And if our hands should meet in another dream
we shall build another tower in the sky.
Khalil Gibran

Truth, like light, blinds.
Falsehood, on the contrary, is a beautiful twilight that enhances every object.
Albert Camus

As nightfall does not come at once, neither does oppression. In both instances, there is a twilight when everything remains seemingly unchanged, and it is in such a twilight that we all must be most aware of change in the air – however slight – lest we become unwitting victims of darkness.
William O. Douglas


The image is taken from my back-yard.
Quotes are from the website – BrainyQuote
Previous   in   2017