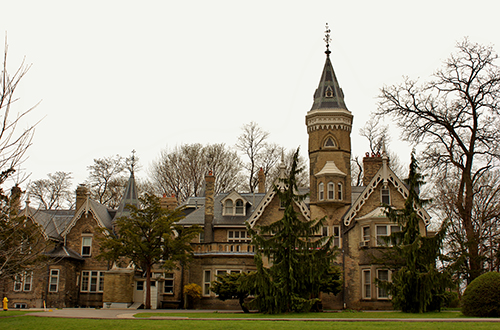 The various Christian Brothers districts throughout Ontario and the U.S. have consolidated and Bobby, an American Christian Brother from New York City, now works with the Brothers’ schools in Canada. It’s the first time that I met one of the guys I was in Novitiate with here in Canada.

The above image is the Brothers’ House on the campus of De La Salle College. The elaborate mansion was built in the 1860s by John McDonald, a successful dry goods merchant. The sprawling house – Oaklands, because of the many oak trees on the property – was completed with a tower observatory that provided Mr. McDonald with a clear view of Lake Ontario some 5 kilometers to the south. The Oaklands mansion has been designated as a historical building by the City of Toronto, as an example of local Gothic Revival architecture.

The Christian Brothers have run a school on the property since 1931. The school is named after the founder Jean-Baptiste de La Salle.