the founding of the republic 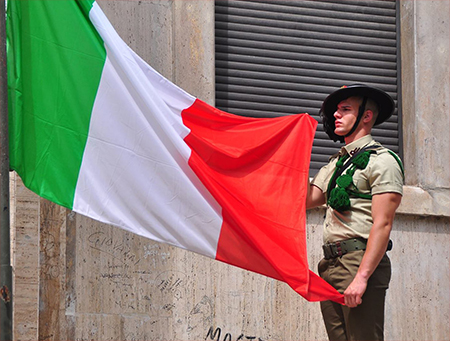 The Festa della Repubblica is the Italian national holiday celebrated on June 2nd. It commemorates the institutional referendum of 1946 when by universal suffrage, the Italian population was called to decide what form of government – monarchy or republic – to give to the country after the Second World War and the fall of Fascism. With 12,717,923 votes for a republic and 10,719,284 votes against, Italy became a Republic; and the monarchs of the House of Savoy were deposed and exiled.

The referendum swept away the feudalism that both the monarchy and the church used to subjugate the people of the peninsula. And let’s not pretend that it won by a great majority; it won by 5%. Does this mean that only after horrendous experiences will people consider advancing systems that push for expanded human rights?


The pic was taken by Osvaldo Spizzirri during the holiday celebration in Cosenza. (Notice the graffiti on the wall behind the flag.)