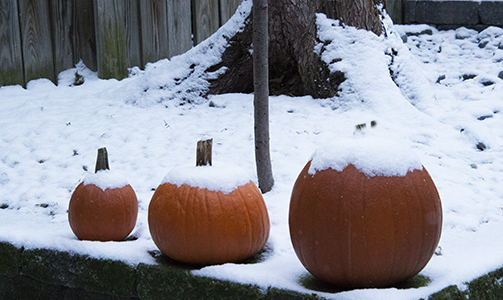 I shot these same pumpkins back at the end of October and then the focus of the post was the coming gales of November. (Back then, there were only the two large ones, the small one was still in the kitchen – fall decor.) It looks like the middle pumpkin may be collapsing. Once they freeze, with the next thaw, they collapse and it’s time to throw them away; fall is officially over.

Today, the weather turned – the skies stayed murky and gray all day, the winds brought blinding snow and when they had exhausted themselves, flurries and dropping temperatures allowed the snows to continue. (Dug out the snow-scraper and put it in the car.)

And today is the infamous election in Alabama. It all feels so much like the Carter years (1977 – 1981) when everything seemed to be in an upheaval; when we lived with stress on a daily basis. The difference is that back then the threats were external, now the threats are internal. Also now like then, new news-programs are emerging and reflecting the anxiety of the times. In 1980, Ted Koppel became the voice of the nation, counting the days that the American hostages were being held in Iran. Today, Rachel Maddow and Jake Tapper are rising above the din to tell the narrative of the times.