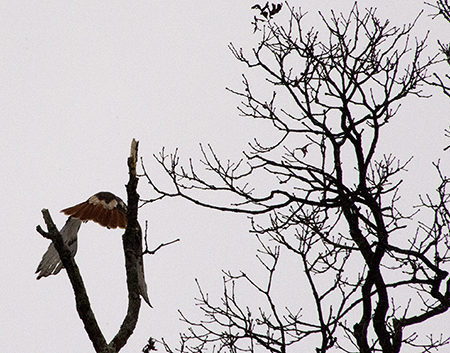 When I was doing the research, the Red-tailed came up as a common hawk in Western Pennsylvania, but I hadn’t seen the birds tail feathers and therefore couldn’t identify it such. Today, I saw one in flight and caught its beautiful cinnamon tail feathers. What also amazed me was the wide wing-span.

Because they are so common and easily trained, the majority of hawks captured for falconry in the United States are red-tails. Falconers are permitted to take only passage hawks (which have left the nest, are on their own, but are less than a year old) so as to not affect the breeding population.

Today’s walk was up North Ridge Drive. The road climbs the hillside above Pearce Mill and it starts and end at Pearce Mill. The other day, I walked the southern portion of the hillside road and today, did the northern leg. The road was plowed and open up to the Senior Center and the Water Tower, but closed for there on. The red-tail was in the trees below the Senior Center.

This leg of the Drive is steep; the overall elevation of today’s walk was 270 feet. I walked a mile-and-a-half in and then back out. Two factors restricted how long I walked: one, the day was gloomy, foggy and very gray making for dull, muted pictures; two, the Steelers were playing at 4:00 and I needed to get home well before that time or have no parking spot. On game-day, our street fills up with cars of fans who don’t want to pay the exorbitant stadium parking fees or get stuck in the post-game, get-home pandemonium. (It’s 7:30 and the fans are just now coming back; there’s a cacophony of beeping sounds out on the street.)