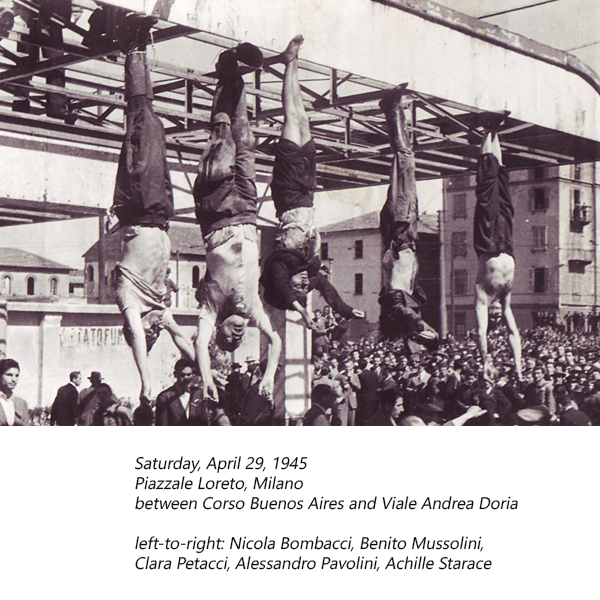 By April 1945, the Allies had landed in Southern Italy; Mussolini was losing his grip on the country; and the Third Reich was considering surrender.

In late April, Benito Mussolini his mistress Claretta Petacci together with other Fascist leaders joined a German convoy fleeing Italy. A group of local communist partisans attacked the convoy and forced it to halt. In all, over fifty fascist leaders and their families were found in the convoy and arrested. On Saturday, April 28, 1945, Mussolini and Petacci were executed by Walter Audisio an Italian partisan, in the small village of Giulino de Mezzegra, 80 kilometers north of Milan.

The next day, the bodies of Mussolini and Petacci were brought to Piazzale Loreto in Milan, the scene of a mass execution of partisans the year before. The corpses were beaten and urinated upon and left to hang upside down from a rusty beam outside a gas station on the north-west corner of the square. (Petacci had not been wearing any underwear and a group of old women rearranged her skirt to preserve her modesty.) People surged around, desperate to get a look, to laugh at and spit upon the bodies, wanting to make sure that Mussolini, fascist dictator of Italy for 23 years, was dead.