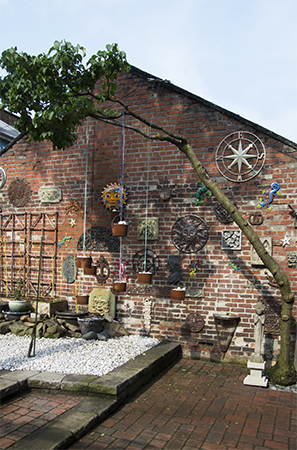 I spent the day working in the back-yard. Began by pruning the Japanese Lilac. Wanted to get rid of the vertical branches near the garage wall for two reasons: (1) wanted to create a wind-swept effect (am thinking of the pine trees, leaning over the rocks that I saw around French River, Ontario)

and (2) wanted to get sun in that corner, because the shade and moisture were creating idea conditions for moss.

The image on the left is from the French River area; the image on the right is the Lilac trimmed and leaning; hopefully I can work on making more of a flow and less of a jut.

After all the work trimming, I tackled the mess, on the pavers, that winter left behind. The four levels were covered in moss and the corners were filled with leaves, needles and sticks from the redwood; the debris and a layer of green covered everything. Grabbing the hose and a wire brush, I went to work. The moss was the most difficult to clean up; I literally wire-brushed half of the back-yard. The resulting accumulation of water, ripped moss and other winter residue was a witches’ brew. There’s a great Calabrese word for this kind of wet mess – fracoma. The meaning suggests something rotten, something putrefied. And the word even sounds like what it means. (As a junior, I had an English prof who explained that fuck was one of the few English examples of onomatopoeia. And that correlation between sound and meaning was more common in other languages, especially ones derived from Latin.)