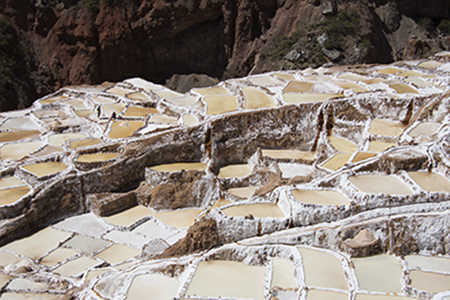 The salt flats are another cooperative effort of the communities around Maras Town.

There is a huge salt deposit under the mountains in this area and subterranean streams carry the salt to the surface. The flow is directed into an intricate system of tiny channels constructed so that the water runs gradually down onto the terraced ponds. (This aqueduct system is like a giant spider web stretched over the salt-flats.) Each pond is about 40 square feet and only 11 inches deep. There are some 700 shallow ponds and maintenance of the feeder channels, the side walls, the water-entry notch, the bottom surface, the quantity of water, and the removal of the salt deposits requires close cooperation among the families and communities that own the flats. Locals and pond workers say that the cooperative system was established during the time of the Incas, if not earlier.

As the water evaporates what’s left behind are huge deposits of salt. The top layer of the salt-flat is harvested and used for the animals, the middle layer is used by the community and the bottom layer, the desirable pink salt, is sold to the tourists.

In a valley perimetered by rugged peaks, a set of cascading ridges, covered with shallow salt-water pools and made white by evaporation, create a prehistoric landscape.