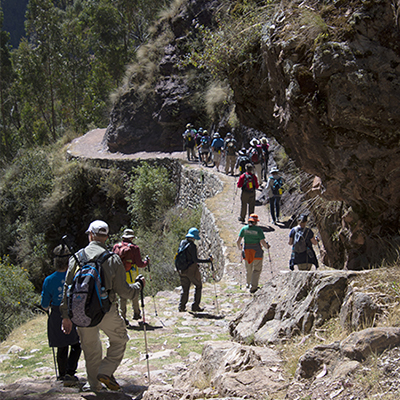 We began at the top of the mountain in the small town of Chinchero, 12,346 feet above sea-level and followed a section of the Inca Trail down through the valley to the town of Urquillo on the valley floor. During the 4-hour trek, we walked 9 miles along the remains of the ancient Inca Trail. In places, the steps were totally gone and you were slowly going down the slope that remained.

The ancient trail hugged the side of the mountain and in 4 hours, we dropped 3,000 feet.

You would think that going downhill should make hiking easier, but downhill places particular demands on knees and hips.

This was a very strenuous trek, made difficult by rock-covered slopes. We all used two walking-poles for stability and to minimize sliding down.

In the above image, we are at the beginning of the trail; and you can still see the walls that the Incas built, along the side of the mountain, to hold the trail-path.