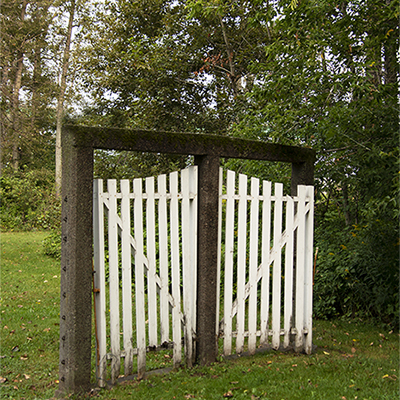 open are the double doors
of the horizon 1

Behind the Superintendent’s residence at the Sault Locks is the original garden and on the canal side of the garden are the gates in the picture on the right. (the residence was built in 1896)

Cement was a wonder material and the idea of building the frame for the gates out of this wonder material showed both ingenuity and wealth. Looking at these garden gates today, it’s an odd juxtaposition.

The Superintendent’s House 2
The Superintendent’s House is set among a group of buildings located on St. Mary’s Island, which is bisected by the Sault Ste. Marie Canal. The two-and-a-half-storey stone building has a gable roof with a decorative bargeboard – an ornamental board fixed to the gable end of a roof to hide the ends of the roof timbers – regularly placed windows and doors with stone surrounds. An open porch protects the main entrance. 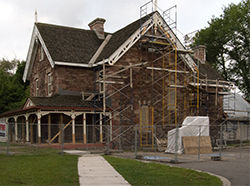 The House is a good example of a building associated with the construction and operation of the Sault Ste. Marie Canal, commencing in 1889, and illustrates the theme of the development of the Canada’s transportation network during the later 19th century. The first ship passed through the locks at the Sault in September 1895, and most of the canal buildings were completed by 1896. The complex of buildings illustrates the crucial years when Sault Ste. Marie was transformed from a small community into a modern industrial center.

The title is from one of my favorite operas – Philip Glass’ Akhnaten – and when I saw the garden gates, I knew I had an image that could fit the refrain – Open are the double doors of the horizon, Unlocked are its bolts. – the scribe sings in Act I.

The image also marks my d800e going on the blink. The shutter-release button is not operating correctly. It’s acting on a delay.