ninth-post – bologna
click to read all the italy – 2019 posts 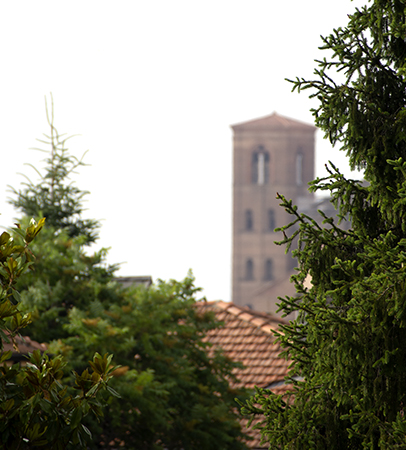 We’re staying at this amazing Airbnb in the southern hills of Bologna; it’s a 3-bedroom apartment. There’s a park – Giardini Margherita – across the street. (On our way into town, we went food shopping and had a picnic in the park.) The apartment building is nestled in the hillside surrounded by sumptuous villas and giant ever-greens. From the balcony, I captured the image on the right. The Romanesque bell-tower is down in the flats, in the city proper.

Bologna is a respite from the craziness of Florence; it breaks up the drive to Venice; and we can eat some of the best food in all of Italy. We went out for gelato; it was so good that we decided to try out their granita – amazing. We then walked over to Restorante Alice and made reservations for tomorrow night. Restorante Alice was one of the reasons to come to Bologna. (Rose, Derrick and I first ate at Alice some 15 years ago and we’ve coming back whenever we’ve been in this part of the country.)

My mother’s generation knows Bologna as a premier medical center; my group knows it as the foodie capital of Italy.

some of my favorite things-1