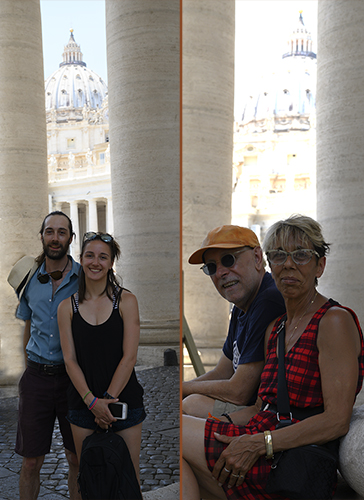 We began this morning at the Colosseum. We were there early and still had a long wait, because once they reach a capacity of 3,000 in the amphitheater, they slow the lines down until some leave. From Monti, we walked to the Pantheon to see the oculus, (I refuse to acknowledge that the amazing Roman temple has been turned into a church.) then onto Piazza Navona and then across Ponte Sant’Angelo and into the Vatican.

In memory – sixty-two years ago – Spring, 1957 – Ciccio, Mafalda, Mario and Connie sat in St. Peter’s colonnade and had lunch. We were in Rome for our physicals, a requirement before we could emigrate to Canada. And in my memory, it’s always the right-side and the area as soon as you go into the of the colonnade.

After our picnic, we went into the basilica and touched St. Peter’s foot – a certain good-luck-charm of the time. We even bought a small statuette of St. Peter, from one of the many hucksters outside the colonnade, to give to my grandmother when we got to Canada. (The thumbnail on the left is the statue inside the church. The left foot is so worn, from pilgrims touching it, that it no longer has toes.) And I remember that when we got to Sault Ste Marie, I gave grandma the small gift. She displayed it proudly and I can still see it on the dresser in the living room that had become my grandparents’ bedroom. (Ciccio, Mafalda and Connie had taken over their old room.)

And that’s where we are, 62 years later, under the right colonnade and away from the white, Roman sun. No food this time only water.

Connie suggested we do a generational pic – the two of us and Seane and Christian – and the composite is those images. (The two images are slivers, because I had to remove a family who was sprawled in the background.) When Connie told Mafalda about our re-enactment, my mother said she had no memory of having gone to the Vatican. All she remembers of the trip was that she had worn heals to “look good” and her feet were so sore that she stayed back in the hotel room when we went on our trek across Rome.