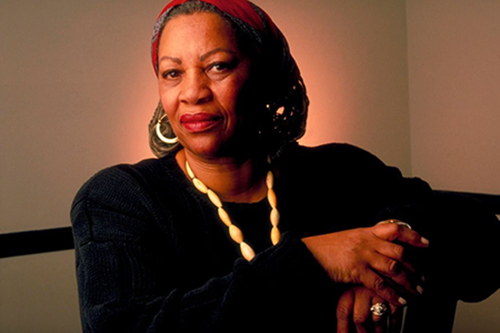 Thank you. My sincere thanks to the Swedish Academy and thank you all for this very warm welcome.

Fiction has never been entertainment for me. It has been the work I have done for most of my adult life.

I believe that one of the principal ways in which we acquire, hold and digest information is via narrative. So, I hope you will understand when the remarks I make begin with what I believe to be the first sentence of our childhood that we all remember, the phrase “once upon a time.”

“Once upon a time there was an old woman. Blind but wise.” Or was it an old man? A guru, perhaps. Or a griot soothing restless children. I have heard this story, or one exactly like it, in the lore of several cultures.

“Once upon a time there was an old woman. Blind. Wise.”

In the version I know the woman is the daughter of slaves, black, American, and lives alone in a small house outside of town. Her reputation for wisdom is without peer and without question.

Speculation on what (other than its own frail body) that bird-in-the-hand might signify has always been attractive to me, but especially so now thinking, as I have been, about the work I do that has brought me to this company. So I choose to read the bird as language and the woman as a practiced writer. She is worried about how the language she dreams in, given to her at birth, is handled, put into service, even withheld from her for certain nefarious purposes. Being a writer she thinks of language partly as a system, partly as a living thing over which one has control, but mostly as agency – as an act with consequences. So the question the children put to her: “Is it living or dead?” is not unreal because she thinks of language as susceptible to death, erasure; certainly imperiled and salvageable only by an effort of the will. She believes that if the bird in the hands of her visitors is dead the custodians are responsible for the corpse. For her a dead language is not only one no longer spoken or written, it is unyielding language content to admire its own paralysis. Like statist language, censored and censoring. Ruthless in its policing duties, it has no desire or purpose other than maintaining the free range of its own narcotic narcissism, its own exclusivity and dominance. However moribund, it is not without effect for it actively thwarts the intellect, stalls conscience, suppresses human potential. Unreceptive to interrogation, it cannot form or tolerate new ideas, shape other thoughts, tell another story, fill baffling silences. Official language smitheryed to sanction ignorance and preserve privilege is a suit of armor polished to shocking glitter, a husk from which the knight departed long ago. Yet there it is: dumb, predatory, sentimental. Exciting reverence in schoolchildren, providing shelter for despots, summoning false memories of stability, harmony among the public.

The systematic looting of language can be recognized by the tendency of its users to forgo its nuanced, complex, mid-wifery properties for menace and subjugation. Oppressive language does more than represent violence; it is violence; does more than represent the limits of knowledge; it limits knowledge. Whether it is obscuring state language or the faux-language of mindless media; whether it is the proud but calcified language of the academy or the commodity driven language of science; whether it is the malign language of law-without-ethics, or language designed for the estrangement of minorities, hiding its racist plunder in its literary cheek – it must be rejected, altered and exposed. It is the language that drinks blood, laps vulnerabilities, tucks its fascist boots under crinolines of respectability and patriotism as it moves relentlessly toward the bottom line and the bottomed-out mind. Sexist language, racist language, theistic language – all are typical of the policing languages of mastery, and cannot, do not permit new knowledge or encourage the mutual exchange of ideas.

The old woman is keenly aware that no intellectual mercenary, nor insatiable dictator, no paid-for politician or demagogue; no counterfeit journalist would be persuaded by her thoughts. There is and will be rousing language to keep citizens armed and arming; slaughtered and slaughtering in the malls, courthouses, post offices, playgrounds, bedrooms and boulevards; stirring, memorializing language to mask the pity and waste of needless death. There will be more diplomatic language to countenance rape, torture, assassination. There is and will be more seductive, mutant language designed to throttle women, to pack their throats like paté-producing geese with their own unsayable, transgressive words; there will be more of the language of surveillance disguised as research; of politics and history calculated to render the suffering of millions mute; language glamorized to thrill the dissatisfied and bereft into assaulting their neighbors; arrogant pseudo-empirical language crafted to lock creative people into cages of inferiority and hopelessness.

Word-work is sublime, she thinks, because it is generative; it makes meaning that secures our difference, our human difference – the way in which we are like no other life.