gerace – byzantium on the ionian coast

The village of Gerace was a great discovery. The road along the Ionian coast is a narrow, heavy trafficked, two-way local that goes through every town between Reggion and Crotone. It’s not necessarily a pretty road given that the railroad sits between it and the sea. We wanted to go to Gerace, but we knew we would have to deal with E90 and therefore we had to push ourselves to grit our teeth and make the drive.

You can see Gerace, sitting on top of its mountain. Gerace is perched atop a 500 m vertical rock. From the E90 and we kept thinking that it was going to be a miserable uphill drive. The road turned out to be fine.  The village of Gerage was another WOW. This is an excellent example of Magna Graecia – Greater Greece. Gerage was at one time the central Greek village governing this entire area of the Ionian coast. 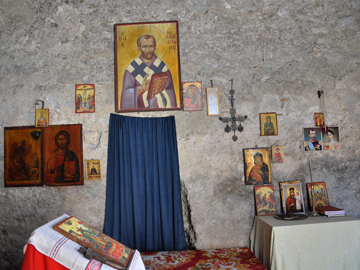 We parked at the very top and walked into town. From the parking lot you look out at the mountain massif of the Aspromonte – a volcanic mountain range in central Calabria. The town’s leaning is Byzantium not Rome. The cathedral and other small churches look like the churches I saw in Jerusalem, not the Latin churches of Italy. The cathedral had a great display of religious art – monstrances, chalices, and statues all made of precious metals. Even the vestments on display were sewn in gold and silver. The main piazza is circled by three ancient byzantine churches. The smallest had all these icons. It looked like no other church I had been to in Italy. The largest in the group was no longer an active church and the sanctuary was all in-laid marble. Again nothing Latin about it. The windows were like those in the Crusade churches in Jerusalem. It was very disorienting, you had to keep reminding yourself that you were in Italy and not the Middle East. Take a look at the pictures of the king and queen on the wall to the right of the icon. Who are they and what are they doing in a church in the heart of Calabria. Also two of the churches we went into had domes made of inverted, terracotta roof tiles. Different. 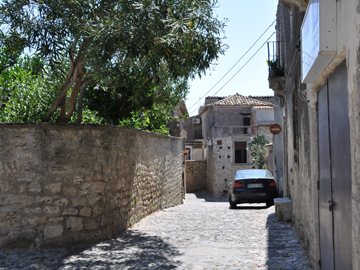 Gerace was unspoiled by tourists and visitors. The small shops that carried souvenir type items were free of the clutter I associate with tourist traps. We couldn’t get over how beautiful the city was; how clean and well maintained it was. It was a city that people took pride in. It was a city with few abandoned buildings. It was a city of lush garden plots attached to houses. (In Aprigliano, the best they could do was cultivate the slopes nearest their homes and even then many of the gardens were quite distant from the house.) In Gerace, it seemed that every house had as attached walled garden. And these gardens were full of grapes and figs and pomegranates. It made for a beautiful sight to have the green hanging over the hundred year old stone walls. You knew that Gerace was a living city. In addition to the gardens there were the modern cars. Nothing ostentatious, but nothing banged up battered.

Scilla boasted all this rehab work. There were signs everywhere of officially sanctioned restoration. Gerace on the other hand had no official signs, but the whole village had been restored in a lived-in style. (Assisi is the Disneyland of religious destinations – pretty but sterile.) Gerace has real people living out their day-to-day lives in one of byzantiums old centers.