Other years August 15 has always been a down day – the stores are all closed, the towns are closed – so this year we decided that we would plan an outing for the 15th. We had decided to go out the one of the Aeolian Islands, an archipelago off Sicily’s northern coast. And between research and a program I saw on RAI, I suggested Panarea.

We went to Reggio on Wednesday and go tickets for the 15th. On Saturday we headed out early not wanting to be late, well that was an American way of thinking. The boat was a half-hour late pulling into the port at Reggio and it was a mob scene. (This same boat was taking people to any one of the five Aeolian Islands.) And to add to the stress we were to transfer at Lipari to another boat that would take us to Panorea. I kept thinking, this will never work. The boat was a hydrofoil.

When we got to Lipari the transfer was across from us. Obviously, everything was running late. We got to Panarea and it again was a mob scene. Even the “beautiful people” have to put up with crowds. We went to a small market, got was and headed towards the beach. Well that wasn’t going to happen. Panarea as all the Aeolians are volcanic islands rising out of the sea. There is no beach, the housing in all on the clifftop and to reach the water many houses have long spiral steps that go down to the sea. The rocks were miserably hot and the sun was baking anything out. I panicked. I had avoided the sun for 10 days and now I was faced with a six hour stay with no beach or umbrella. 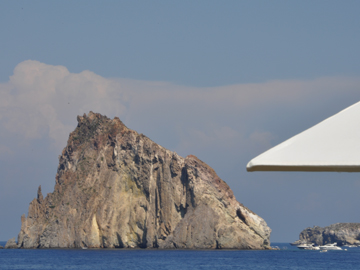 I went to what turned out the be the most desirable and luxurious hotel on the island – Hotel Raya -and asked if they had “day-passes” for the terrace with the umbrellas and chairs. The young receptionists had me ask the owner – an older woman. I put on my best American charm and asked her if there was any option for using the terrace with the umbrellas and chairs. For some reason she said yes.

Went out and called to Rose and Derrick and announced that we could use the terrace. After getting over the shock of having been given permission to use this luxurious promontory and after settling down from the fear of being stuck in the baking sun to wither, I finally looked out and saw … What was in front of me was a “WOW”.

This flat vantage point looked out on the Mediterranean littered with huge sailboats and even bigger yachts. And in the middle of all this money were jagged volcanic slabs punctuating the blue. (I know how to think about and talk to rich artists, rich intellectuals, the landed gentry, but I have no idea how to think about people who spend their money on yachts, people who leave port in the morning and spend the day sunning under a desert like sun rolling on azure waves. I don’t know this form on human.) But I quickly let go of that confusion, took out my iPod and headphones and began listening to Dylan … to dance beneath the diamond sky with one hand waving free silhouetted by the sea, circled by the circus sands with all memory and fate driven deep beneath the waves.

Around 5:30 we left the terrace and went walking through the island. All the housing is whitewashed. This uniformity makes the place truly beautiful – the sky-blue water, the red volcanic rock, the green cactus and the white structures. 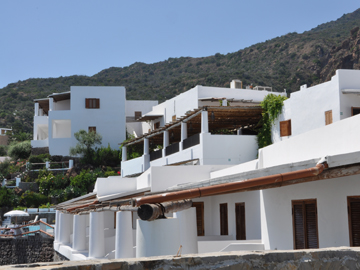 The island had these narrow roads and the vehicle of choice is the golf-cart. I guess when you have the Mediterranean to show off your 80 foot yacht, driving around in a golf-cart is OK. We went to the cemetery where the locals are buried. It is a simple place of simple tombs. Everything is above ground, because you can’t dig into the volcanic rock. The mountain side behind the cemetery was covered with prickly pear growing from every rook and cranny.

It finally came time to go back to the docks and wait for our boat back to Reggio. On this trip we would not need to transfer. The boat was 45 minutes late. This time I was really anxious. What were we going to do if it didn’t come? (We had gone to the Hotel Raya for a drink, and two Heinekens and a Martini and Rossi cost us $42.75. Imagine what a room would cost? Also, we suspected the waitress pocketed most of the money.) And the people-watching on the dock was depressing. I never saw so many frivolous peacocks in one small space. Men walking, as if they owned the world, get into catamarans at 9:00 at night and head out into the Mediterranean. Many time, while waiting for the boat, I kept thinking of the cliche – Mussolini made the trains run on time.

I was glad to be off Panarea and heading back to the real-world.