I was going to go up to Portosalvo to take pics, so I drove up to Guarno, because I needed to get back in time for the 10:15 mass at San Leonardo.

Once in Santo Stefano I met a man who was heading out to La Sila and asked about the key. He showed me where it was kept and told me that whenever the key is not there, it means someone it at the church. Key in hand I made my way to Portosalvo. 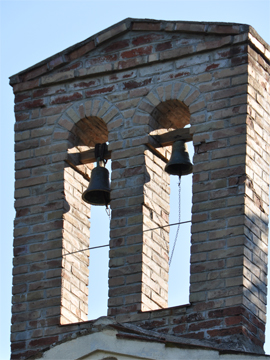 The road, a dirt road one lane wide, was all uphill. I don’t remember that. I guess the last time I was there, I was so glad to have found the key that I paid no attention. This time I had the key to the front door. The chapel was dark and I had no idea where the lights were, so I used the flash. I took several pics of the bell-tower. It was in the sun and looked great against the blue morning sky. Because I had been here back in 2006, it wasn’t such a “wow” experience.

It occurred to me that I had begun to rely on the bells from San Leonardo to tell me the time. The bells tolled every 15 minutes, so I always knew what time it was. I realized that doesn’t help with being on time, it just tells you if you’re late. By 9:30 I was on my way back.

Mass at San Leonardo was another experience. The church was packed, something that Mario’s family commented on. I sat there with Tonina and all the ladies who had been at the rosary came up and said hello. Alyssa was up in the choir loft and Mario was somewhere else. 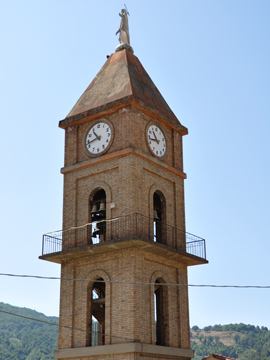 San Leonardo is the church for Corte and its bell-tower with la madonnina on top is the defining landmark for Aprigliano. The church is also surrounded by the new housing plan that Mario and Tonina live in. It’s the entrance into Aprigliano. Another reason why Agosto and Vico get pushed to the side. In actuality, San Leonardo is really in the middle of the mountain side making it the middle of Aprigliano, but because Vico and Agosto are off the main road, San Leonardo has the feeling of the gateway into the town. I remember it always having an uppity reputation, and the generation that created that reputation is now the in-charge generation. (Santo Stefano it’s rival has faded, but it seems to be on the rebound.)

In the afternoon I went with Mario and Alyssa into the archives at San Leaonardo and we found my Baptismal certificate. (It states that I was 4 months old when baptized. This information is there, because it was unusual to wait that long before getting baptized. My mother told me that I almost died soon after I was born, so they quickly baptized me. And once I recovered, they waited until spring to take me to church for the more formal baptism. Two different people baptized me. A friend of my mother’s brother who was in his early teens did the first baptism. In early spring my mother’s friend was my sponsor. No one else was mentioned on the certificate.