The read this series in chronological order,
click on the category title – le Marche-12 – on the right.

I’ve always wanted to steal lines from John Denver’s Leaving on a Jet Plane and I finally got the opportunity. (I took the shot from the scaffolding covering the front of the Bologna cathedral.) 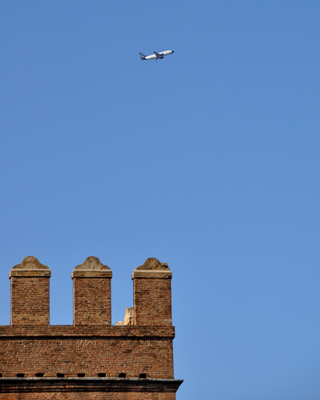 At 4:30 in the morning even the tourist-packed, under-renovation airport in Bologna is empty. I was the second person through security.

The story of the return trip happened at the airport in Frankfurt. I was one of the first to board the US Airways flight to Philadelphia, so I’m sitting there across the tarmac from an EL AL plane. The entire ground around the plane was roped off and there was a police vehicle at each corner and an armed guard patrolling the perimeter. (The guard had an Uzi strapped across his chest.) Any airport worker coming into the roped-off area was frisked with a metal detector; the perimeter was so secure nothing was allowed to breach it without a full body inspection. There were two layers of security that workers had to maneuver around – the outside layer with the police cars and guards, the inner layer with about 10 supervisors. The police and guards kept people from coming in, the supervisors managed anyone inside the security zone. I don’t know if this is standard-operating-procedure for any and all EL AL planes, or if this only happens in Germany. (I’ve never been on the tarmac next to an Israeli plane before.) I watched for almost 45 minutes and all movements were scrutinized and recorded. Yes, the supervisors had clip boards and made marks every 10/15 minutes.

The trip home, compared to the trip there, was uneventful. (My conclusion is don’t book a trip that has me going through three different airports.)