The title is from Dylan’s new album – Tempest. I don’t know if the entry will have anything to do with the title, because I’m going to write about olives, One Young World and probably anything else that comes to mind. 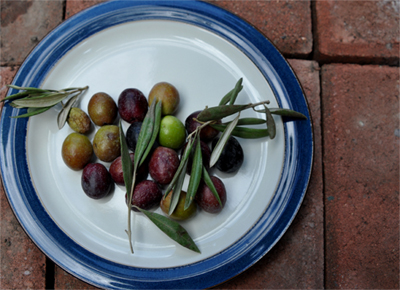 Olives
This year, the olives came from a produce distributor on Penn Avenue in the Strip. He charged a fortune, but then when you’re the only vendor in town you can do that. Unlike other years when the olives came directly from the growers in California, this year the distributor bought 500 pounds and re-packaged them into 10 lbs. boxes and sold them for $30.00 a box. They are Sevillano olives and it was a mixture of olives at different stages of maturity – baby greens, young maroons and mature blacks. I’m hoping that this will add flavors to cured, finished product. (The other olive story is from 3 years ago – the customs official in Buffalo took the California olives that I had bought in Toronto and threw them into the garbage can next to his booth. A nasty man.) The image on the left is a sample of the olives, the stems on a porcelain plate on top of a pallet of bricks.

It was nice sitting in the back deck, cutting the olives. For the second year, we cut them. In the past we cracked them. I told the story of back in Calabria my parents giving me and my friends the job of cracking the olives. In my head there’s a picture of me, Franco-e-Crocca and Corrado cracking olives on the cement in front of our house. When we got bored we’d throw the olives at each other, but stopped when my mother, realizing that laughter meant no-work and mischievousness, came out and yelled at us.

Welch joined us. She wanted to see how we cured the olives.

One Young World
The One Young World conference was in Pittsburgh this year. First year it was in London, last year it was in Zurich and this year Pittsburgh. (And naturally everyone is surprised. Will I live long enough to have Pittsburghers realized what they have here? To realize that the rest of the world understands what we have better than the locals do?) The keynote at the conference was President Bill Clinton.

The conference featured an educational component and they invited three local groups who represent educational reform to speak to the delegates. City High hosted the session. There I was on a Saturday afternoon hosting a bunch of “children” from all over the world who had come to my school to see what we are doing. (Propel Schools and the Pittsburgh Public Schools were also invited and I hosted it.) The person from Propel and the person from Pittsburgh Public Schools were examples of groups that adopted many initiatives and procedures we’ve been doing at City High for 10 years. So when it was my turn it was fun to break the mold – the old man as a young thinker – and to realize we at City High are the trailblazers. There I was, one of the grandfathers of school reform in Pittsburgh. It was a dark illumination.