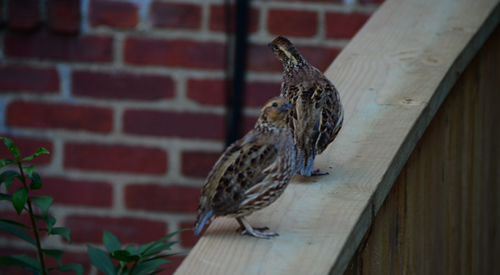 In my grammar-school basal reader, the story about the Canadian prairies had a drawing of a mother quail, followed by her brood, walking through wheat fields. For whatever reason, that image has stayed with me all these years. I have no idea what the story was about, but the picture is vivid in my memory. I think I tried to read the story, but the memory impression is that it was boring and a disappointment compared to the vibrancy of the picture. The earth tones, the brown-orange plumage the golden wheat were all beautiful – a romantic impression of the far away prairies. (I think the image referenced some seminal memory of wheat fields, full of poppies, in Calabria.)

Last Friday, a number of creatures made their way into our backyard. There was the outside cat that decided to curl up under the hose-box. A family of quail that took over my neighbor’s back-yard. There were two adults and four large chicks. Two of them decided to fly up onto the top of the fence. (I wonder if the cat was really stalking dinner hoping the immature cheepers would jump down into my yard.)