When I was up in Maine with Mac, we went into this art gallery in Kennebunkport. It had these great windmills and I really wanted one. But the cost was also great, so I had to be satisfied with window-shopping. Today, on my last trip to the greenhouse to finish off the backyard I saw someone looking at these double windmills. (The place was empty, so I got to see inventory that has been hidden behind the mobs buying plants for their summer beds.) I went over and saw that they were interesting and that the price was reasonable, I bought one. 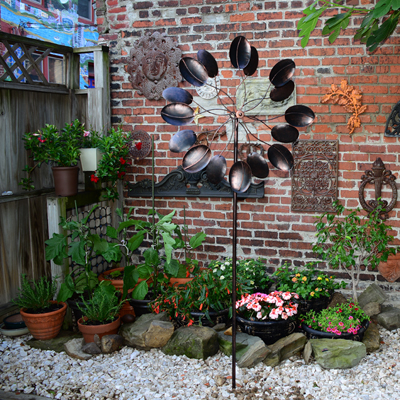 (Right now it’s in the middle of the backyard, but don’t know if this will be its final placement.) The entire back corner is new. (Originally the bonsai racks were here, but a couple of years ago I ripped out the racks and started putting pots on the ground.) I’ve had to replace most of the terra cotta pots, because they did not make it through the winter. And given that I was also redoing the side-yard, I decided to get new pots that I could leave out all year.

In the mix are two pots of Rosemary, four posts with eggplant and a ficus tree bonsai. The rest are all flowers. (I made the change the summer of 2011. I was in town for an extra week, because Paul had had surgery and while sitting out, I decided to rip out the bonsai racks and began to redesign the area.) Two years later, I’ve been able to create a setting that from year to year I can fill with my favorite annuals – Lantana, small Petunias, and Begonias. The perimeter rocks I pulled from under the Cypress and Pine where they had become lost under the ground-cover.