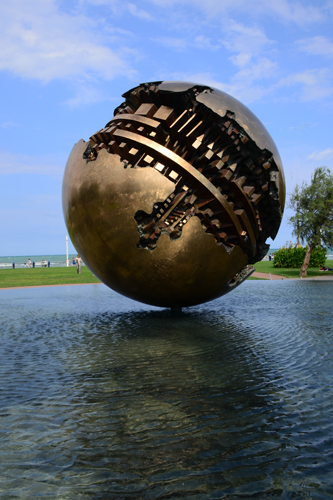 Pesaro’s main street goes from the old city center down to the Adriatic. At the terminus on the beach-front, the city put this huge bronze sculpture, the image on the right, which has taken on the name of the artist, rather than the name of the piece. This is all helped by the fact that the sculpture’s last name is the Italian word for tomato. Everyone knows and refers to the sculpture not by its name – Sfera Grande – but as il pomodoro – the tomato.

We went to Pesaro to tour Villa Imperiale, the 14th century castle of Francesco Maria Della Rovere, Duke of Urbino. This was a summer-palace/hunting-lodge for the family. The villa and grounds are still privately owned by the Della Rovere family. And the castle is open to the public one day a week during the summer months. The Della Rovere family like all Italian noble families are closely linked to the papacy. And the narrative of the castle is all tied to the story of the papacy in the 14th and 15th centuries. (I think it’s easy to think that Italian nobility, because it is so tied to the Roman Church, is different than all others. Not true. The difference is that women are totally missing from its ranks, unless you count all the Mary substitutes, and the powerful men all wear Cardinal red.) The villa boasts a series of frescoed rooms the last of which is a portrait gallery of the papal court of one of the Della Rovere popes. The walls are littered with men in red hats.