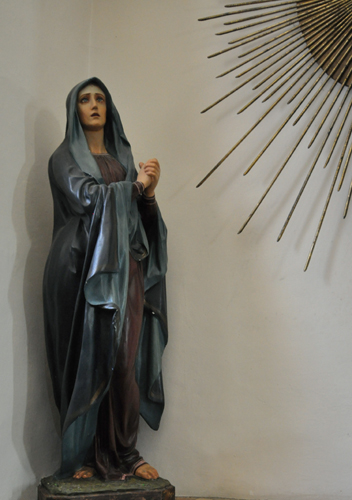 This is a variation of the classic Dolorosa – black-draped, gold-trimmed and mourning madonna. Most renditions represent Mary as distraught, forlorn as any mother would appear witnessing the crucifixion and death of her son. The rendition I remember best is –
La Dolorosa in Santo Stefano in Aprigliano.

I found this Mary in a small chapel in one of the hill-top towns on the opposite ridge from Earle-and-Suzanne’s. (The sun burst is really the background of the altar crucifix, but I like the image better without the cross and instead a hint of hope from the rays behind her.) The black drapery has given way to a dark blue cloak and the ringing hands, usually down below the waist, are up in prayer and supplication. (I also like the elongated neck and purple under-garment.)

This afternoon, in flipping through channels, the Mass on EWTN had the celebrant wearing black vestments. An old custom that has since given way to white, to remind the living of the joys of heaven in the life here after.

This year, the feast day is a time of remembrances.