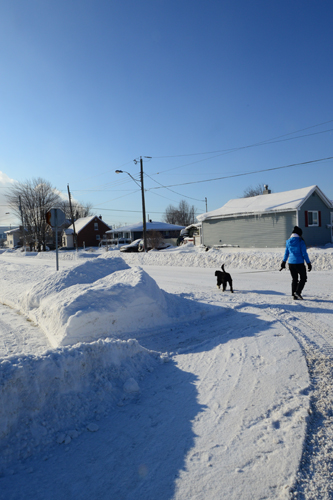 Seane, Lilly and I went out walking the neighborhood. We’re on Douglas, the street perpendicular to my parents’. The pavement is hidden below the snow-pack and will probably stay out of site for the next couple of months. The snowfall this year has been heavy and early. Already the snow-banks are over 3 feet and winter just started. Yesterday we got 3 additional inches of fresh show. I shoveled my parents’ 30 foot, double driveway, but my dad didn’t like my work and got the man he contract with for snow removal to re-plow.

Boxing Day in the Soo is still fully observed and no stores were open. Merchants in Toronto defy the law and open. They pay the fine and still make a profit on all the shoppers looking for a discount. (It’s Canada’s Black Friday.) According to Wikipedia – Boxing Day is traditionally the day following Christmas, when servants and tradesmen would receive gifts, known as a “Christmas box”, from their bosses or employers. (Isn’t that generous – the upper classes giving to us low people.) Boxing Day is observed in the United Kingdom, Canada, Hong Kong, Australia, New Zealand, Kenya, South Africa, Trinidad and Tobago and other Commonwealth nations. (Will Canada ever give up its connection to good old England?)