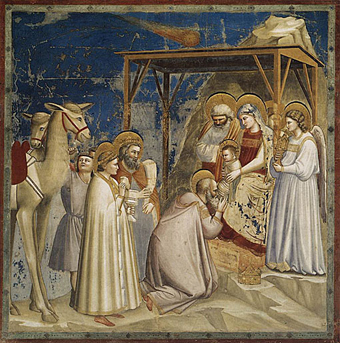 The impetus for this entry is the magical word twelfth. I can’t spell it, because I have no understanding of how you combine a t, a w, an e, an l, an f, another t and an h into a word. What were them Middle Englishers thinking? And yet I love the contortions the tongue has to perform in order to make the sound. It comes out like an incantation.

Not to be outdone by them 14th century peoples, I’ve assembled my own contradictions from highfalutin Shakespeare (the post title), and Giotto (the image), to the low-brow Twelve Days of Christmas (the entry title). While using the Catholic feast of the Epiphany to tie them all together.

The pic is Giotto’s Adoration of the Magi. (Giotto’s frescoes remind me of American primitive paintings.) With camels and gifts the three kings have followed the comet – the brown ball at the top of the image – to the stable at Bethlehem. In the fresco, this stable seem to be the end of the road. The oldest king has taken off his crown and kneels before the child. All present watch except for the camel driver who prefers to attend to his animals. (He’s my favorite character in this Medieval pageant.)

The 2013 Christmas season is done. And good riddance. I am so glad to be nowhere near northern Michigan; to not hear anymore carols, holiday greetings, birthday wishes or questions about retirement.

Yesterday, I went over to Rick-and-Sarah’s and we booked our flights to Italy for August.