and they shall beat their swords into plowsharesIsaiah 2:4 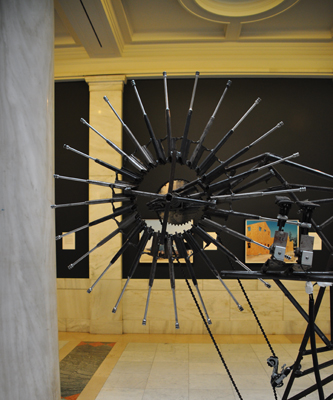 “. . . string-and-percussion music rises from the room below. The source is an array of eight mechanized sculptures by the Mexican artist Pedro Reyes, made from pistols, assault rifles, machine guns and grenade cases that the Mexican government confiscated from drug cartels.” (Peter Schjeldahl – The New Yorker, October 21, 2013)

The 2013 Carnegie International has two pieces that I really like – Pedro Reyes’ gun-sculptures (The sunburst on the right is made of gun barrels.) and Taryn Simon’s photographs of all the weapons, vehicles and most of the actresses from the James Bond movies. My favorite image was that of Honor Blackman whose character in Goldfinger is forever hardwired into every 1960’s boy’s brain. The photographs of the Bond women were recently taken and Ms. Blackman now looks like an elegant grandmother. But in my mind she will always be Pussy Galore.

There are two outside pieces, one by British sculptor Phyllida Barlow and one by the Swiss designer Yvan Pestalozzi. The Barlow piece is an immense jungle of boards wrapped with wire mesh, slathered with cement and gray paint and festooned with strips of colored cloth. It covers the space in front of the main entrance and leans against the miserable Richard Serra steel plates. The Pestalozzi piece is playground equipment – a huge, colorful, snaking tunnel with kid-size openings.

It’s not a large show, but many of the pieces are fun and that is not something you can say about most museum surveys.