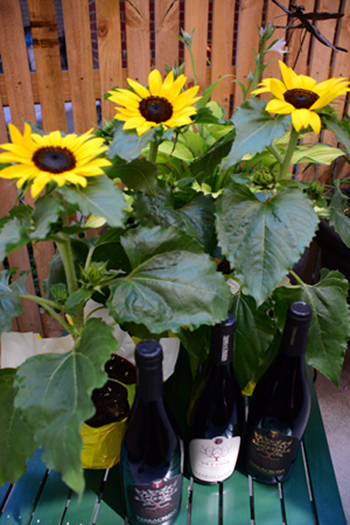 Yesterday, I went and picked up the wine-order Tom sent from San Francisco. It included 6 bottles of Aleatico and two Calabrese wines. The Aleatico is from the Terracruda Winery in Fratterosa. Last summer, our last day at Earle-and-Suzanne’s we went up to the Ferragosto festival in Fratte Rosa – the hilltop town across the valley. While waiting for the restaurants to open, we got in line for a wine tasting. There were only five of us – 3 Americans and 2 Australians – and the young man organizing the tasting, led us down into a brick-walled, vaulted basement. He explained that we were standing in his grandmother’s cantina. (The link is to the post from last summer.) The white wines were OK, but the reds – Lubaco, Ortaia, Vettina – were amazing.

The young man explained about the Aleatico – a dark-skinned grapes with muscat-like aromas. (The Muscat family is touted as the oldest common grape vine on the planet.) He also told us about the new winery – Terracruda – his family had started that uses this ancient grape. They were re-introducing this old vine back into Le Marche, back into the Fratte Rosa region where it had been grown by the men and women who worked the land. Fratte Rosa is becoming the center of an artigianale movement to re-discover the lost fruits and vegetables of Le Marche. The fruits and vegetables that the contadini grew, harvested and made into wonderful foods and drink.

Got home and began searching for a distributor of Terracruda wines in the U.S. And a year later, I have have six bottles, two each of Ortaia, Vettina and Lubaco. I knew I was going to shoot the bottles for a post and while at the grocery store I saw the sunflowers. I had a new composition. We’re not going to Le Marche this summer and I’ll miss the sunflower fields, but I can include the yellow petals in the pic and remember.