The event was organized around a meet-and-greet, a 1964 trivia competition, 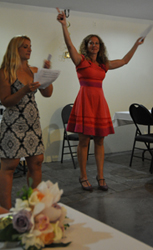 (Liza and Jennifer hosted.) Susan and Gordon renewing their vows and dinner.
Where was Gordon-and-Sue’s first apartment?
– Jane Street, a couple of blocks up from my grandparents.
Who was the Prime Minister of Canada in 1964?
– Lester B. Pearson
Which Canadian company opened its doors in 1964?
– Tim Horton in Hamilton, Ontario
Where did Sue and Gordon meet?
– In the elevator of the office building they were working in.
Who won the Stanley Cup in 1964?
– The Toronto Maple Leafs beat the Detroit Red Wings 4 game to 3. 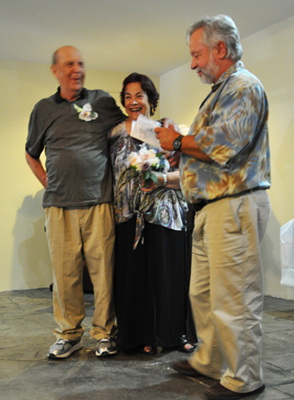 Renato knew most of the answers and our team won 3rd place. When Lisa handed out the prizes, we got a bottle of white wine. And as we all know the Calabrese don’t drink white wine, so Renato went over to another team that had also won and swapped the white for a red. (He is such a Zinga.) The only answer I contributed was which famous American general died in 1964.

After the trivia game, Sue and Gordon renewed their vows. (I don’t know if the person officiating was a minister or a Justice of the Peace.) When they got married back in 1964, a Justice of the Peace officiated. I’m sure my extended family in Toronto was scandalized image! – they did not marry in a church; Gordon was not Italian or Catholic – scandal squared.

A second reason I went up was to see some of the relatives on the Zinga side and to get the contact information for Mario in Rome. Sue said she had it and I’ll follow up with her when I get home.