I drove from Toronto – Dave’s house – to Chesley, Ontario. Chesley is 3 hours north-west of Toronto in farming country. It’s that same geographical swath of Ontario that extends south all the way to Windsor. The housing stock is old Canadian farmhouse and the Chesley area has a large Amish community. It’s a bit hillier than the area around Harrow where Rainer lives, but here in Chesley it’s the Georgian Bluffs and by Harrow the bluffs give way to flat prairie. 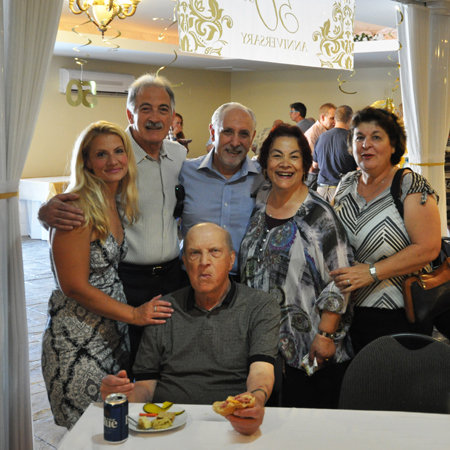 The drive was on country roads with bush or farms on either side. Because I wasn’t sure where I was going, I’ve never been through this part of Ontario, I decided to give myself some extra time and found I was the first guest to arrive. Jennifer was putting up the road-sign announcing the reception and I stopped, rolled the window down and said, “You and I look like we’re from the same family.” She was glad to see me and knew that her mom would be extra happy.

The next people to arrive from the Zinga side were Renato and his wife Gina. Renato is my Uncle Michael’s son. We are almost the same age and we’ve always gotten along. (He was 13 when his family came from Aprigliano.) In the above image, left to right, is Jennifer, Renato, me, Susan, and Gina. Gord is sitting.

Renato, Gina and I had a wonderful time getting re-acquainted. It was really the first time that I got to spend time with Gina without a mob of Zingas around and we discovered we could laugh and laugh. We even had a great time ripping on Renato. The Zingas on Uncle Michael’s side are the nice ones and Renato is one of the nicest. So ripping on him is extra fun.

In past family events we were the younger generation, but there were so many other parents, grandparents, uncles and aunts that we never got a chance to just be ourselves. We were always in service to the older group. And today it was just us, and the fact that the other Zingas didn’t show for a while, we got to laugh and have fun.