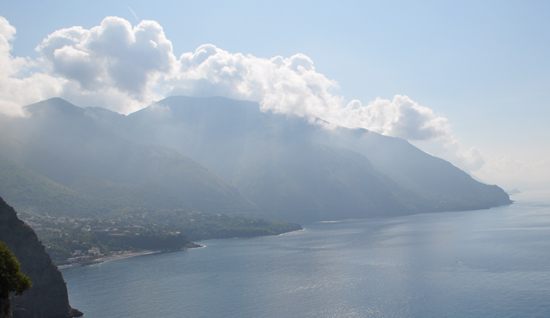 In planning the best way to get to Naples, we decided to use the beach road or La Strada Superiore – SS18. These were the highways, before the Autostrada. (To reach the Autostrada we would have had to travel south, even though Naples was north and secondly the Autostrada would have shown us nothing new. The SS18 went up the coast and since it was past beach season, we should not hit traffic.)

The SS18 through norther Calabria was one beach-town after another. What was interesting was to see places that had direct access to the beach. In most of Calabria, the railroad prevents direct access. You have to find the tunnels under the railroad in order to reach the beach. Once out of Calabria, we came to Basilicata and the road is on the side of the mountains. It is a ledge and on the side of the mountain drops down to the sea. Basilicata has no coastal plain, but the small towns we went through were well maintained.

In the above image, the view is from a stop on the coastal-road looking back at the landscape we just drove through. (It reminds me of the Napali coast on Kaua’i.)