in the church of the poor claresepilogue-2 – italy 2014 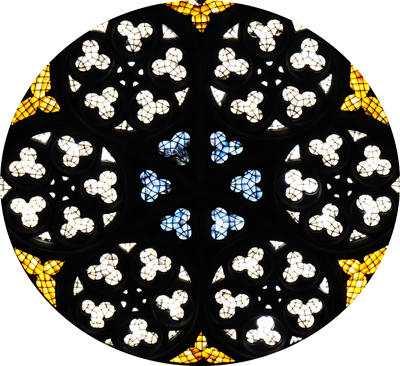 The huge campus that is the church, monastery and cloister of the Poor Clares was an amazing complex and then there were the majolica tiles and columns throughout the garden cloister. We saw the chapel after visiting the Gesù Nuovo, the over-the-top Jesuit church in the square – Piazza del Gesù Nuovo – of the same name. The chapel was in stark contrast to the Baroque Gesù.
(Only the Jesuits have the coglioni to call their church The Jesus.)

I’m doing this post more because I wanted the work with the image on the left; it’s the round window on the back wall in the chapel of the Poor Clares. I shot the image with a zoom and I got a black background with this circle of light. I had to figure out how to isolate the circle and create a tondo-like photograph. 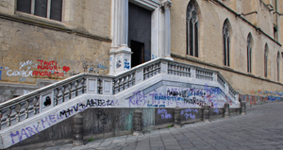 The chapel and the whole complex was a great example of an inside-naples and an outside-naples. The chapel was this amazing minimalist space, but step outside into the courtyard and the whole wall is littered with graffiti. Naples is full of graffiti especially the area around the university. It seems that throughout Italy, university students have decided to decorate their environments with wall scrawl. (Very different than here where graffiti is the domain of the middle and high-school students.) A while back the graffiti throughout Italy was political, this time all I kept seeing were announcements of who loved who. Pathetic! University students reduced to scrawling ti amo and on a wall that already is crowded with lettering. Maybe if they spent more time hitting the books, Italy’s test scores wouldn’t be scraping bottom.