landing in a waterless pond 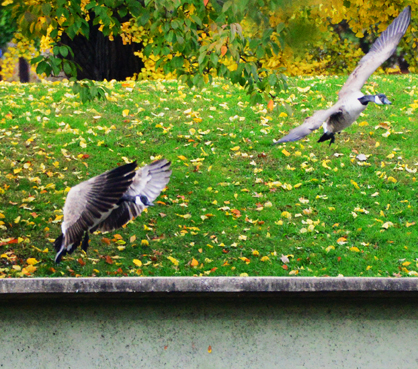 The picture on the left is from the walking-through-the-park set of images. The ducks don’t seem to know that the pretend-lake in West Park has been drained and wont be filled again until spring.

The other thing that happened while walking through the Park was I got my picture taken by Guy Wathen a photographer for the Tribune Review. There I was in my sweats, quilted jacket and hat on backwards minding my own business, shooting with my d800e. This young man comes up to me and says, “I’ve been waiting for someone to come along and take a picture of the red tree. I’m Guy Wathen with the Tribune Review and I took a picture of you taking a picture. Can I use it in our newspaper?” What was I going to say? (The thumbnail is a link to the large image.)

News – there’s a new puppy in the house. I drove out to Findlay, Ohio to get him. He comes from a very famous breeder. She runs a high-end kennel, her animals win top prizes and her animals are well behaved. (I walked into her house and there were at least a half dozen terriers running around, but there was no barking or yapping.) Of the 3 for sale, I took the friendliest and he’s got a great personality and has bonded very nicely. He’s six months old. The puppy behavior will last for another couple of months.