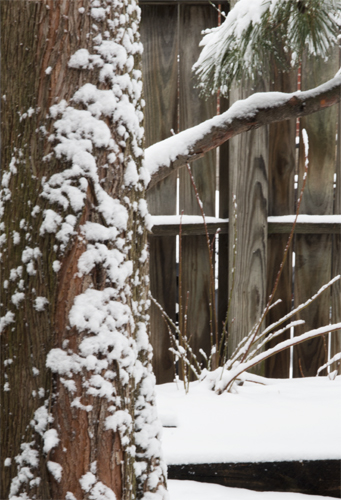 Winter will not go gentle into that good night and to prove its might, it dumped 3 inches of snow onto the region. The only thing I like is that the new snow covered the melting, filthy ice. (Sault Ste Marie looses its worn and tattered look when blanketed with new snow. At those times it can look postcard beautiful.)

In the background is the flowerbed full of snow-drops, but the snow-mound has kept them hidden and unable to poke through. (In other years, when the snow cover was minimal, they would have poked their green leaves and lantern buds through the white blanket to announce the coming sun.) I like the compression the lens is recording – don’t the branch and green needles look like they are part of the tree trunk? Well the trunk is the red-wood, the branch and needles belong to the pine tree – two different plants. Also, the small branches in the background are blueberry bushes. (The Cloudy White Balance does a really good job picking up the grain of the fence planks.)

The weathermen are all claiming that this is the last storm of the season. All I can say it that am glad it came this week, because next Thursday, at this time, I’m supposed to be on a plane heading west, looking for the sun.

What I’m enjoying most about using the Manual settings is that I can work with the built-in light meter. (My first SLR camera had a light meter slider on the display, but the next set of cameras have it on the light meter seen through the view-finder and it’s taken me a while to look at it and to use it. Now, I have to start to making decisions about what I want in terms of the reading the meter gives. I was making the adjustments already using the histogram, now I have to transfer those decisions to the light meter info.)