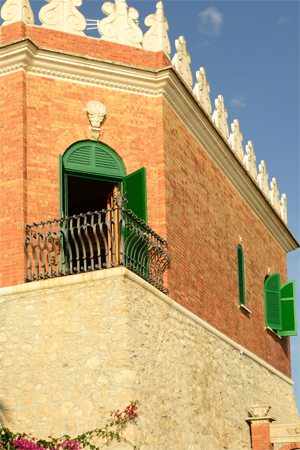 We drove two-and-a-half hours north to the Gargano, a peninsula jutting out into the Adriatic. It was the first time I saw mountains.

We rented at a B&B right on the ocean. The problem was the address. We’ve had the most problems getting people to give us house numbers for the places we’re going to. The B&B was no exception. We headed into town thinking that someone could help, but we quickly realized that the town and the resorts down on the water were not necessarily integrated. The best we got was directions down to the water and from there we stopped a couple of times until someone knew the B&B we were searching for.

Originally, the B&B was a defense tower along the Adriatic coast. The grandfather bought it and added a second floor. The stone is the original tower, the bricks are the addition. The shutters on the right are for the room I was in.

Rose and I were both worried about this booking, because it was made through an international group rather than directly with the owner. But when we got there all the worried went away. The second floor is all decorated with precious antiques, amazing.

The reason for the trip north was to go see the Santuario San Michele in Monte San Michele and Renzo Piano’s cathedral in San Giovanni Rotondo. (Renzo Piano designed the Pompidou Center and the new Whitney Museum.)