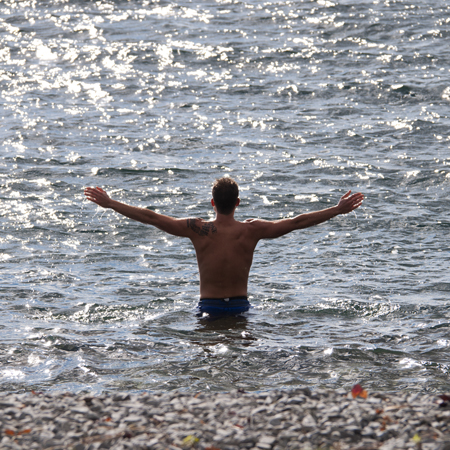 I’m in Kingston, Ontario and Seane and I are walking the Queen’s campus. It’s a chilly November morning and even this far north, there are crazies who wade into the frigid waters.

I had never been this far east (Kingston is three hours east of Toronto.) and all the Canadian cities I’m familiar with are the industrial towns of southern and north-central Ontario – Toronto, Hamilton, Windsor, Sudbury, Espanola, Sault Ste Marie. Kingston was a great surprise. It is free of heavy industry – mills, mines – and full of British colonial homes and structures. Kingston was the capital of Upper Canada – the British colony in Canada. The city is at the end of Lake Ontario and at the mouth of the St. Lawrence. It has always been a militarily strategic port. It is home to the Royal Military College of Canada. Modern Kingston has maintained its colonial infrastructure. Many of the old houses have been renovated and re-purposed. And there are no smoke stacks or mine shafts belching into the clean air. (The first and third images in the slide-show are of Kingston.)

Queen’s University – named after Queen Victoria – is one of Canada’s premier schools. (Professor Emeritus Arthur McDonald was the co-winner of the 2015 Nobel Prize in physics.) The campus is beautiful and its old Victorian Romanesque buildings preserved and all still in use. (Some different names – the school’s head is called the principal and in Canada they do not use the terms freshman, sophomore … rather 1st years, 2nd years …)

Seane is living in an old turn of the century house. The houses in the old town remind me of the houses in England. They are very small. I couldn’t get over the fact that London was filled with these small houses. Outside the royal and government structures, the housing was low and narrow. And the old house in Kingston are low and narrow. (There are few tutor style houses, which became the rage throughout the industrial cities of Toronto, Hamilton and Windsor, instead the housing stock is older and much more classical in form.)