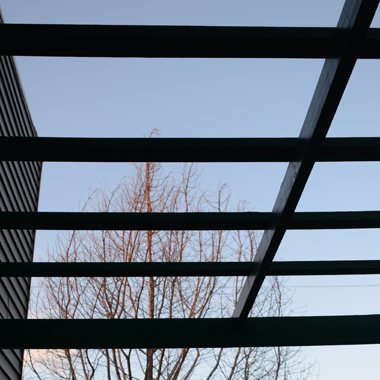 I only write about weather in winter. Within two days – Saturday to Monday, we went from 59o to this morning’s low of 19o. And since the last post, there are 3 additional minutes of daylight. (For some reason that was a difficult sentence to create. Daylight is an odd noun to structure a sentence around.)

The 2X4 grid, in the image, is the roof structure on my back porch.

I’ve decided to not watch any of the 24-hour cable-news except for Rachel Maddow. She’s the only host who doesn’t traffic in innuendos, gossip, fear-mongering or personal opinion. (Chris Hays will chase any story that has an African-American angle. And then contort it so that he can layer his version of liberal tolerance on top of it. Lawrence O’Donnell can’t disguise his dislike of Hillary Clinton and obsession with politicians from New England. He practically orgasms over Elizabeth Warren.) But it’s because of Rachel Maddow that anyone if paying attention to the horrors happening in Flint, Michigan.

The three main networks – CNN, MSNBC, Fox – run Trump all day. And with the three channels chasing ratings, the Presidential primaries have become reality TV. Every word, gesture, pause is analyzed and great pronouncements made.
Is the Vice-President endorsing Bernie?
Is President Clinton going to stay on message?
Is Donald Trump going to go after Ted Cruz?
Did you see Hillary’s face when the announcer mentioned Jeb?
Did you see Rubio’s new shoes?

Is this what 17 century Versailles was like?
The King’s toilette was exceptionally fragrant this morning. Were you there?
Of course. I had a front-row seat next to the Cardinal.