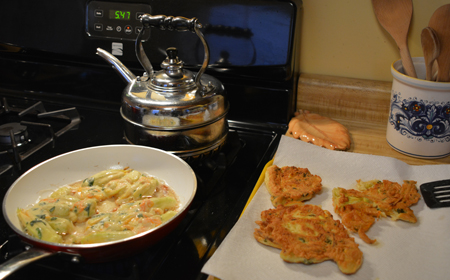 Along Sampsonia Way, my neighbor, whose back-fence is not up against the alley, planted a couple zucchini plants in the small, raised flower-bed outside her back-fence. The plants are now well over 10 feet in length. And because some of my other neighbors planted annuals along my back-fence, I am out in the alley watering; and because I need to keep the wisteria contained, I am out in the alley, with my little step ladder, trimming all the off-shoots sprouting from the wisteria vines; I’ve been keeping an eye on the zucchini plants. And my neighbor seems to have no idea that the golden male flowers are edible. And after watching many of these golden delicacies shrivel and wither, I decided it was time to pick them and make fritters.

Zucchini, like all squash, has its ancestry in the Americas. However, the green, cylindrical squash harvested immature and typically called zucchini was developed in northern Italy. A description of this new squash, under the name zucchini, occurs in a work published in Milan in 1901. Zucca is the Italian word for pumpkin/squash and zucchino (zucca + ino = little) is the diminutive form, becoming zucchini in the plural.

I went out with my colander and filled it with both opened and unopened flowers. (Paul went on and on about my having stolen from my neighbor.) I cleaned the flowers removing the stems and green petals. The shriveled flowers need to be opened, because ants and cucumber beetles tend to get caught in them. Next, made the batter – equal parts flour and cheese, two eggs, parsley and salt to taste – threw the flowers in and fried them. (At my parents’ zucchini flower fritters are a summer staple. My dad picks the flowers every morning and my mom makes and fries the fritters for lunch and a late afternoon snack.) The above image has the fritters – some golden brown and some still in the skillet.