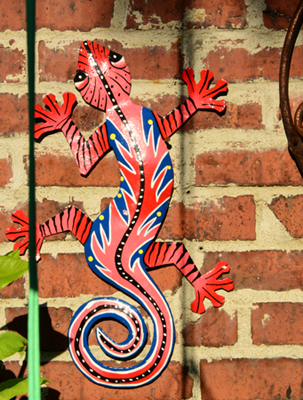 The majority of the wall-plaques have no color and then, I found 3 painted-aluminum salamanders from Mexico. The one on the left is the biggest. I like the hints of the other things in the pic; on the left are the green leave of the sweet potato vine as well as their shadows; the black-green rope holds one the buckets hanging from the Japanese Lilac; in the middle is the hint of another one of the ropes; and on the right is the outer arc of a circular iron ornament.

My favorite image from this shoot is the first one in the slideshow – the tiny, blue oregano flowers, the rocks, the sweet-potato vine and the negative black spaces. Whenever I’m hiking and see a hole in the rock or a deep black tunnel on the side of a cliff, I fantasize that some creature lives in it. The black spaces in the above image bring back those wild ideas.

This miserable election has me turning off all cable news. People who live with it 24-7 must be living anxious lives. Everything is an occasion for anxiety; everything Trump does is widely reported; nothing Clinton says is reported at all. By November, on Fox, there will be real-time Trump fart-alerts and a death-watch for Clinton. Will this election finally put the nail in broadcast TV’s coffin? Will this election finally marginalize all the old people who have been living with the boob-tube in every room of their house? Will this be the last election to play out on TV? Please let it be the last election to use broadcast TV with its headline porn, because the next generation has no loyalty to the manipulative, greedy bastards running the networks. At least the head of CBS admitted that Trump is the ruin of the country, but a ratings super-star.