This is the first time in almost 20 years that I flew up to Sault Ste Marie at Christmas. The thought of driving through the unpredictable, miserable snow-belt that is Grayling/Gaylord was too scary. 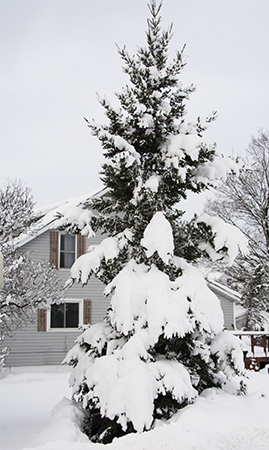 And I followed the old protocol from 20 years ago and booked through Air Canada. When I made the reservations back in June, the lay-overs in Toronto were not bad, but by the end of October, Air Canada had made so many changes to my itinerary, that today I had a 5-hour lay-over and next week, when I go home, I’ll have a 6-hour lay-over. Today, I had breakfast with my cousin Joe and next week I’ll go visit Frank-and-Norma.

The other inconvenience was the walk from the gate to customs. It took me 30 minutes and there were no interruptions or delays, just miles of glass-walled corridors. (I can’t think of any other airport that I’ve been in where I’ve walked that far from where we deplaned to where I could exit the building.)

What I’ll do in the future is fly Air Canada into Toronto, because they have an early morning flight and then fly Porter between Toronto and Sault Ste Marie. There’s a direct shuttle between Pearson Airport and Union Station downtown. And from there, I can then walk to City Airport to get on a Porter flight to the Sault.

The surprise is all the snow. Everything in Toronto is covered in a thin layer of white. Up here, the snow is easily 6-inches deep; the roads are covered with packed-snow; and the snow-banks are over my head.