the saint, the bishop and the politician 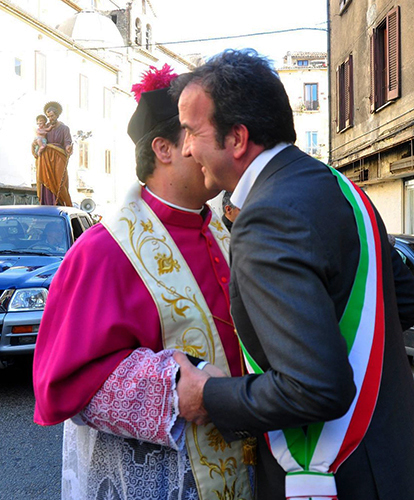 part two – click to go to part one
This photograph was in the collection of images that Osvaldo Spizzirri posted on Facebook yesterday after the procession for St. Joseph in Cosenza. I had to use it. The man in the red-pink cassock and white-gold stole is some bishop or other; the man in the suit and sash is the mayor of Cosenza, Mario Occhiuto.

It’s common knowledge that the Pope gets his largest audiences in Puglia, Campania, Basilicata, and Calabria. They are regions where Catholicism still holds a firm grip. And they are also some of the least developed, most rural areas of Italy.

So, it’s no wonder that the St. Joseph celebration in Cosenza shows the affinity between church and state. An affinity that has not served the people of the Mezzogiorno, or southern Italy well. Mother Church has just been another controlling factor in the lives of the Italian contadini.

I remember my utter depression when at Monte Cassino I realized that in 1944 while Calabria emptied, because its people were starving, Mother Church rebuilt the Benedictine monastery, bombed by the Allies, in 6 months. Tell me Mother Church was about the poor, the hungry, the forgotten, the victims of Italian and German fascism. Go ahead, tell me.

It’s no different now; the church where the statue of San Giuseppe was housed is well maintained, its outside walls freshly plastered and painted, but the historic center of Cosenza, where the church is located, still looks like a slum. (Calabrians don’t seem to gravitate to gentrification or restoring their Medieval heritage. The cry seems to be, “Let’s move out and into new construction.”)