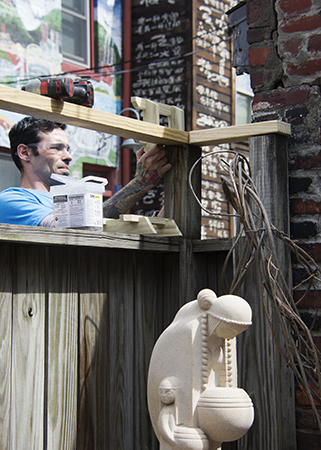 I needed to solve two problems – replacing the weathered 2X4 cap on the wolmanized back fence; and creating guide-rails to hold the ever-growing wisteria vine. Where the fence posts and pickets have held up exceptionally well, the 2X4s across the top had deteriorated. Also, I had started weaving the wisteria around the old caps and as the vines thickened they were swallowing the old 2X4s. It was time to replace the fence caps and to design a workable solution that would allow the vine to grow and spread.

This will be the third season for the wisteria and it’s easily some 30 feet long. (Wisteria has a very rapid growth rate – up to 10 feet a year.) It’s a genetically altered plant and it already bloomed last spring. (In the old days, before genetically modified plants took over, the rule-of-thumb was that wisteria didn’t bloom its first 7 years.) Also, you can trick the plant into blooming by planting it in dire soil conditions – a nutrient starved soil can triggers the plant’s survival mechanism forcing it to bloom and seed. I planted the vine in the most inhospitable corner of my back-yard. I still remember walking the Upper East Side and seeing wisteria growing among the cement cracks of the front pads and seeing the vines, full of flowers, snaking up the fronts of the brownstones.

Years ago, we planted a wisteria at Rick-and-Sarah’s, but it has never produced flowers. It was probably not a genetically modified variety and we planted it in very rich, well-watered soil. Every year the plant covers their back deck in a luscious, green canopy, but it doesn’t bloom. It doesn’t need to; it’s living in the mar-a-lago section of a Wilkinsburg back-yard.)

The contractors at DNL Home Improvement came up with these Japanese looking brackets that got screwed on the sides of the new caps across the back-and-side fence. (In the slide-show, the second image is of the wisteria twisted around the old weathered 2X4 and the third image is the wisteria inside the new brackets.)