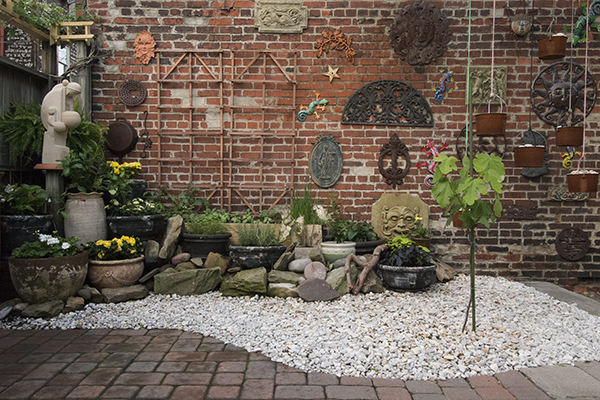 The common wisdom, in this part of the country, is to wait until Mother’s Day to plant annuals. Well, I’m two-and-a-half weeks before the guaranteed frost-free date.

The flowering plants seems to be relegated to the left corner and only white and yellow are being featured this year. Yes, that’s a fig tree in the foreground. It’s a Chicago Fig touted as able to survive our Zone 6 winters. I’ll let you know how that goes. And it’s a dark fig not the desirable, uppity white variety I had from Aprigliano. Also, returning for a new season are the oregano and the chives planted last year.

Confession time – I did something I’ve never done before – throw plants away. I wanted to cram the vegetable planter with seedlings and so I bought 2 cherry-tomatoes, 6 basil, 4 zucchini and 4 cucumber plants. Even though I hated the taste of the cucumbers and the vine had become totally infested by the striped beetle, I put 4 of the plants in my cart. (Come on, they were big and bushy. And I pretended that this year, the cubes would taste better.) Then on Saturday, I went to another nursery and they had a Burpee variety that I knew and immediately decided to replace what I had. This would mean pulling out and throwing away what I had planted only days ago. The next trow-away was for aesthetics. It appears that Dragon-wing Begonias, my favorites, only come in red and that’s not a desirable color this year. (Need I remind you who perpetually wears an overly long red tie to cover his bulging fatness?) So today, I bit the bullet and replaced the beautiful Dragon-wings with a hybrid Wax Begonia, in white.